Baby named Arrow may be good luck charm for Chiefs 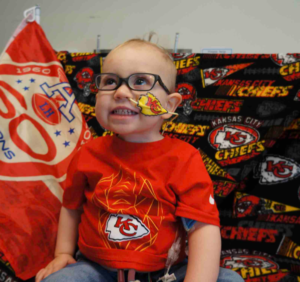 A baby named Arrow was born on Super Bowl Sunday, was told he’d receive a heart transplant on a Red Friday, and may just be a good luck charm for the Chiefs.

KANSAS CITY, MO  (KCTV) — A few days after her son was born on Super Bowl Sunday Ellen Gill learned he had a congenital heart defect.

“I saw his doctor walk into the room,” Gill said. “I knew immediately it was much worse than we had thought.”

At just 8 months old, doctors performed open heart surgery on her son. Even after surgery, his little heart couldn’t take over.

Doctors put him on ECMO support, or extracorporeal membrane oxygenation support. Gill’s son was able to recover and go home.

At a routine heart checkup, doctors saw his heart wasn’t functioning like it should.

“Those moments are heartbreaking and really, really hard to bounce back from,” Gill said. “But, overall, he has had so many more up days than down.”

Ellen quit her job and moved to Kansas City to be with her son. She got a room at the Ronald McDonald House just up the road.

“While it’s not the journey I would have chosen, I am thankful for our journey, for his life,” Gill said.

Gill gave thanks when her son lost his heartbeat and doctors were able to bring him back after 30 minutes of compressions.

“It’s a horrible thing to have to think about your child’s mortality,” Gill said.

Gill got the call on the first Red Friday of the 2019 Chiefs season. Her son was getting a heart.

Gill hopes that one day she’ll be able to meet the family who saved her son’s life.

She said it could be a part of her healing process as well as theirs.

Strong, much like the name she gave to her son.

“His name has been so fitting for his journey and everything he’s been through,” Gill said. “I think we couldn’t have chosen a better name for him and his life.”

Gill and her son’s father decided to name their firstborn Arrow. They had Arrowhead stadium in mind when they named their Super Bowl baby.

“I’ve had people tell me an arrow must be pulled back before it can be launched, and I think about that a lot,” Gill said. “He’s had a lot of things that have pulled him back but he’s being launched into his future and it’s going to be a very beautiful future.”