Zei Uwadia was the girl next door who would get lost in a good book, took quiet hikes in nature and preferred being alone in her room to socializing at another teen party.

With her determined spirit and independent attitude, the 16-year-old student at North High School in Wichita, Kansas, was on track to graduate early and pursue a career in dermatology.
But suddenly, in late October, she felt herself gasping for air. With each passing day, she had more difficulty breathing. Her body weakened, and her lungs started to fail. No one knew why.
In November, the otherwise healthy teen was placed on life support in the pediatric intensive care unit at Children’s Mercy Hospital in Kansas City.
Now, more than 130 days later, Zei’s determination and independence have helped her achieve something only a few patients before her could: She has walked while on life support. 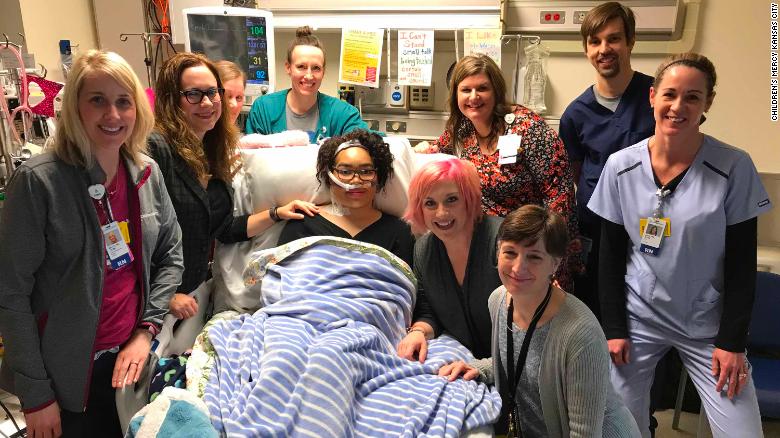 Zei Uwadia, center, with her mother and medical team at Children’s Mercy Kansas City. Clockwise from left: Kari Davidson, Dr. Jenna Miller, Ryanne Toland, Julie Pearson, Debbie Newton, Dr. Jay Rilinger, Jill Dinkel, Dr. Marita Thompson and Zei’s mother, Brie Kerschen.
Despite being tethered to an extracorporeal membrane oxygenation, or ECMO, machine that is helping her breathe and keeping her alive, Zei has been determined to take every step possible to regain her lung function and strength, starting with walking.
As doctors continue to search for the cause of her illness — finding more questions than answers — Zei has managed to pace the halls of Children’s Mercy, surprising and inspiring many.
Zei is the hospital’s first patient to sit up, stand and walk while on ECMO.
“I was just really excited because it was one step closer to getting home,” Zei said, speaking exclusively to CNN from her hospital bed on Friday, of walking for the first time.
For Zei’s mother, Brie Kerschen, her daughter’s first time walking while on ECMO was a sign of hope.
“When she first took her first steps in the hallway, I’m pretty sure I cried, and then you could probably also hear my laughter,” Kerschen said. “I really am convinced that that saved her life, and not to be dramatic, but I think the fact that she’s able to walk is why she’s still here.”
While on life support and under round-the-clock care, Zei also has eaten tacos, visited the hospital’s Lisa Barth Chapel, lifted weights and even had a manicure. Her acrylic nails are now the crimson color of a rose.
Though Zei’s case is unusual and not all ECMO patients can expect a similar prognosis, her story has inspired patients and physicians worldwide.

The ECMO machine, often called the “highest form of life support,” uses a pump to circulate a patient’s blood through an artificial lung. The artificial lung adds oxygen and takes out carbon dioxide before the blood is returned to the patient.
Essentially, ECMO helps provide enough oxygen to a patient while allowing time for the lungs or heart to rest and heal.
The national survival rate in the US among neonatal and pediatric ECMO patients is about 72%, and at Children’s Mercy, where more than 800 patients have been on ECMO, the rate is about 78%.
Kerschen remembers when her daughter’s journey from being a healthy teen to being on ECMO began.
While Zei was at school, “I got a text message around noon from her that said, ‘I just don’t feel good; can Nana come pick me up? I just feel light-headed and dizzy and sick,’ and I said, ‘yeah, I’ll see if I can get a hold of her,’ ” Kerschen said.
“Then her next text was, ‘Please hurry.’ I remember because I still have that text.”
In the days following, Zei had difficulty breathing. Kerschen took her to see an emergency physician, and she was admitted to Via Christi Hospital St. Francis in Wichita.
“Her lab work came back normal, and she had no signs of a bacterial infection. So with that, I think they consulted Children’s Mercy,” Kerschen said.
Zei was transferred on a medical flight to Children’s Mercy in Kansas City on Halloween.
“Her primary deficit was with oxygenation, and so her oxygen levels have been low and remain her biggest problem,” said Dr. Jenna Miller, a pediatric intensivist at the hospital, who has been working on Zei’s case.
“What we know is that all of her lung tissue on both sides is affected. What we don’t know is what caused it,” she said. “We have investigated both infectious diseases — rheumatological, immunological, primary pulmonary diseases — and we have not come up with the answer yet. So we continue to try to reach out to other centers and have big collaborative discussions to figure out what is wrong with Zei.”
Zei’s time on ECMO has allowed her left lung to fully expand and begin healing, and her right lung is close to fully expanding, Kerschen said.
Zei “has the longest ECMO run we’ve had in our institution,” said Debbie Newton, director of the hospital’s neonatal and pediatric ECMO program, who added that usually for respiratory failure, the average time a patient spends on ECMO is about 21 days.
ECMO support for more than 100 days is rare.
There have been conflicting reports of the longest ECMO run overall in pediatrics, but at Johns Hopkins Medicine in Baltimore, a pediatric burn patient spent 551 days in between ECMO and using a ventricular assist device, possibly setting a record.
Yet using the machine can come with possible complications, risk of infections and other side effects related to bleeding, some of which Zei has faced.
“She has to have thin blood to remain on the machine, and so the thinning of her blood is what makes her able to circulate her blood through this plastic tubing and not clot. That same blood thinning is what causes her to bleed, and so people can actually pass away on ECMO from bleeding,” Kerschen said.
“She’s cried red blood tears, and she’s had bloody noses, and we’ve gone through those things, but we’ve made it,” she said.
Ever since Zei was placed on ECMO, a specialist has been monitoring her machine at all times. ECMO is not something a patient can take home.

In December, Zei’s health stabilized, and she became more alert — but no one was ready for her to walk.
As she started asking her doctors about being able to sit up, stand and walk, they were unsure how she could take steps safely while hooked to the ECMO machine. At the time, Children’s Mercy had no protocol in place for Zei to take a stroll around the hospital.
Newton remembers the day in late December when that changed.
“We were in Zei’s room, and she had been marching in place for a little bit, and she looked at me with very little voice … and just said, ‘What do I have to do to walk?’ And I told her ‘if you can stand unassisted for five minutes, I’ll figure it out,’ ” Newton said. “Not only did she stand for five minutes, she had to beat me, she stood unassisted for seven minutes.”
As it happened, the hospital was in the middle of a multidisciplinary assessment on how to safely permit patients to walk while on the ECMO machine. The assessment plan was scheduled to roll out over an extended time period, but Zei’s strong will to walk put the plan on a faster track.
Newton and her colleagues quickly developed a safety protocol, involving a comprehensive checklist, to make it possible for ECMO patients like Zei to move and walk around the hospital with minimal risk.
The checklist includes: making sure ECMO is attached to the patient safely and securely; pausing after every position change or movement; regularly reassessing the patient’s attachment to the machine.
The ECMO team studied adult cases from around the world in which patients had walked in order to develop their protocol.
Once the new protocol was in place, Children’s Mercy received inquiries from other pediatric hospitals interested in developing their own safety checklists to improve care for ECMO patients.
So Zei’s bravery possibly could pave the way for other hospitals to allow for their ECMO patients to walk and exercise, if able.
“I hope someday Zei realizes not only what she’s done for our program but what she’s going to do for other programs,” Newton said. “I don’t think at 16, you can really wrap your mind around that, especially when right now her ultimate goal is to just go home, but I hope someday that she realizes the impact she’s had on us and hopefully others out there in the world.”
Kerschen has been documenting her daughter’s recovery on YouTube and received messages from viewers around the world indicating that they are inspired by Zei’s rare case. The responses have made Zei’s small corner of the hospital feel big for Kerschen.
“We now have friends in Taiwan and South America and the Middle East and really every country has joined her or me on Facebook and taken an interest to her,” Kerschen said.

Zei’s most recent X-rays showed improved lung function. Her doctors attribute those results in part to her being able to walk and exercise.
As her diagnosis remains unknown, her doctors hope for her lungs to regain function soon, or her other option is to be put on an organ transplant list for new lungs.
In the meantime, Zei is still eager to graduate early and has been completing her schoolwork while at Children’s Mercy.
“The biggest relief will be to walk back into our house and for her to be able to walk up the stairs to her bedroom and be able to just lay down in her bed and relax,” Kerschen said.